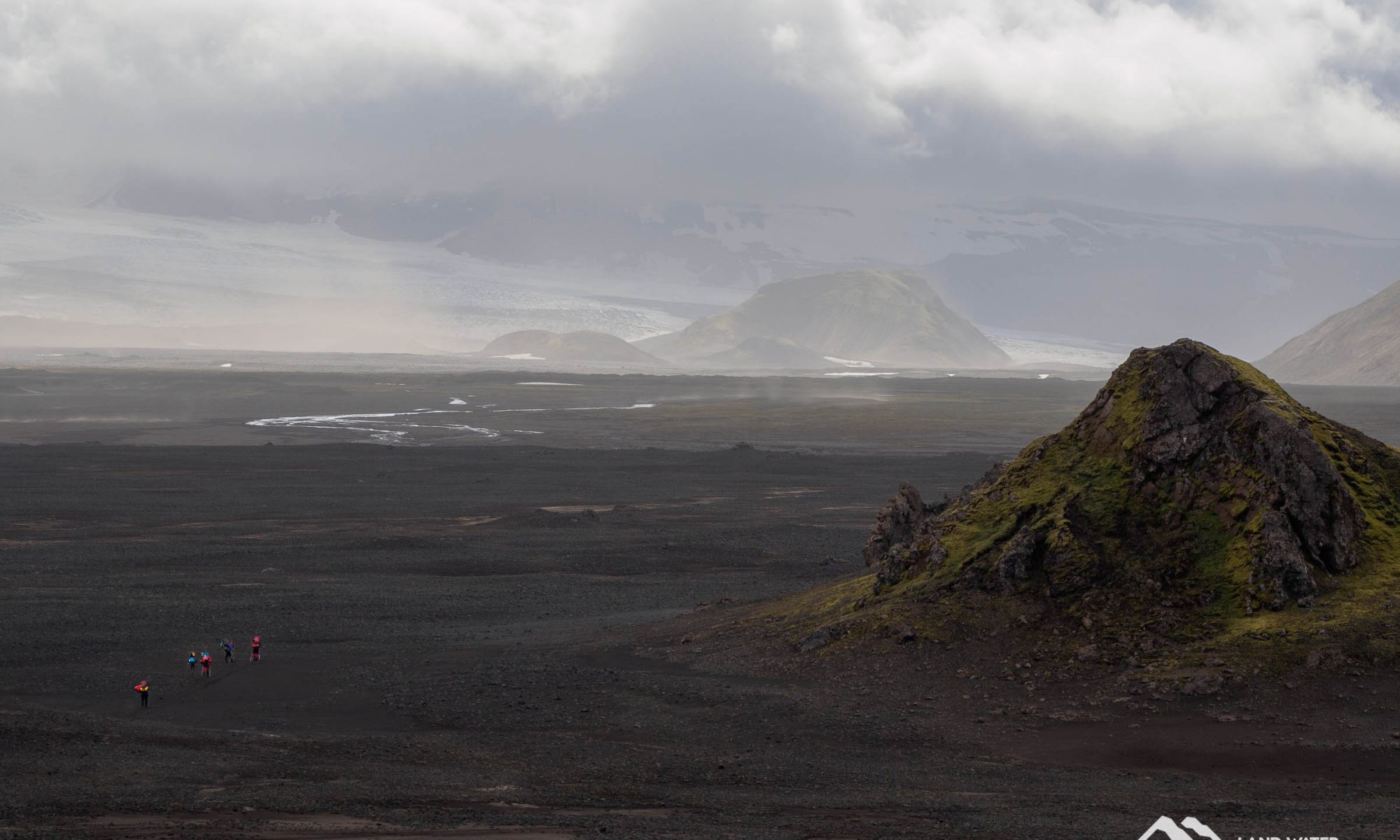 The strong winds of the previous evening have subsided.

It all looks like it's the morning of a rather short day. Over the past 4 days, we have worked out a time-cushion in this, for Icelandic conditions, good weather and now only have to go a short distance to the next river.
When we meet at 8 o'clock with packed backpacks for the morning briefing, none of us - and not even the maps - know the canyon that will change our route, we do not yet find fine lava sand in every part of our tents which the strong gusts this evening will bring us and we have not yet seen the raging stream, against whose crossing on foot or in the packrafts we will decide. We are on an expedition and this day will make that clear again.

This chapter and all of this year's Iceland expedition are unwritten, as an off-roader brings us to our dropoff point. Exposes us. Satellite tracker on, we take a group photo and soon everyone is in their own minds as we take the first steps of 7 self-sufficient days in which we plan to come south across water and land, out of the highlands onto the coastline of Iceland. How they feel, these first steps in an adventure is different for everyone, for the guide team they are the end of much planning and organization and the beginning of a journey we will write with our participants day after day.

Not long after these first steps, at the end of the second day - behind us are rivers and lakes, paddling, trekking and carrying packrafts, snow fields and colorful sulfur mountains - Berit fills a pack with some ice and we watch questioningly. It's not until she pulls out 6 small tins of Secco and French mini tartlets that we realize why her backpack was so heavy. Soon after that, we are sitting in front of the tents and celebrate her birthday. That day started with a brownie from the guide team, blowing out candles and congratulations from the whole gang in the morning. 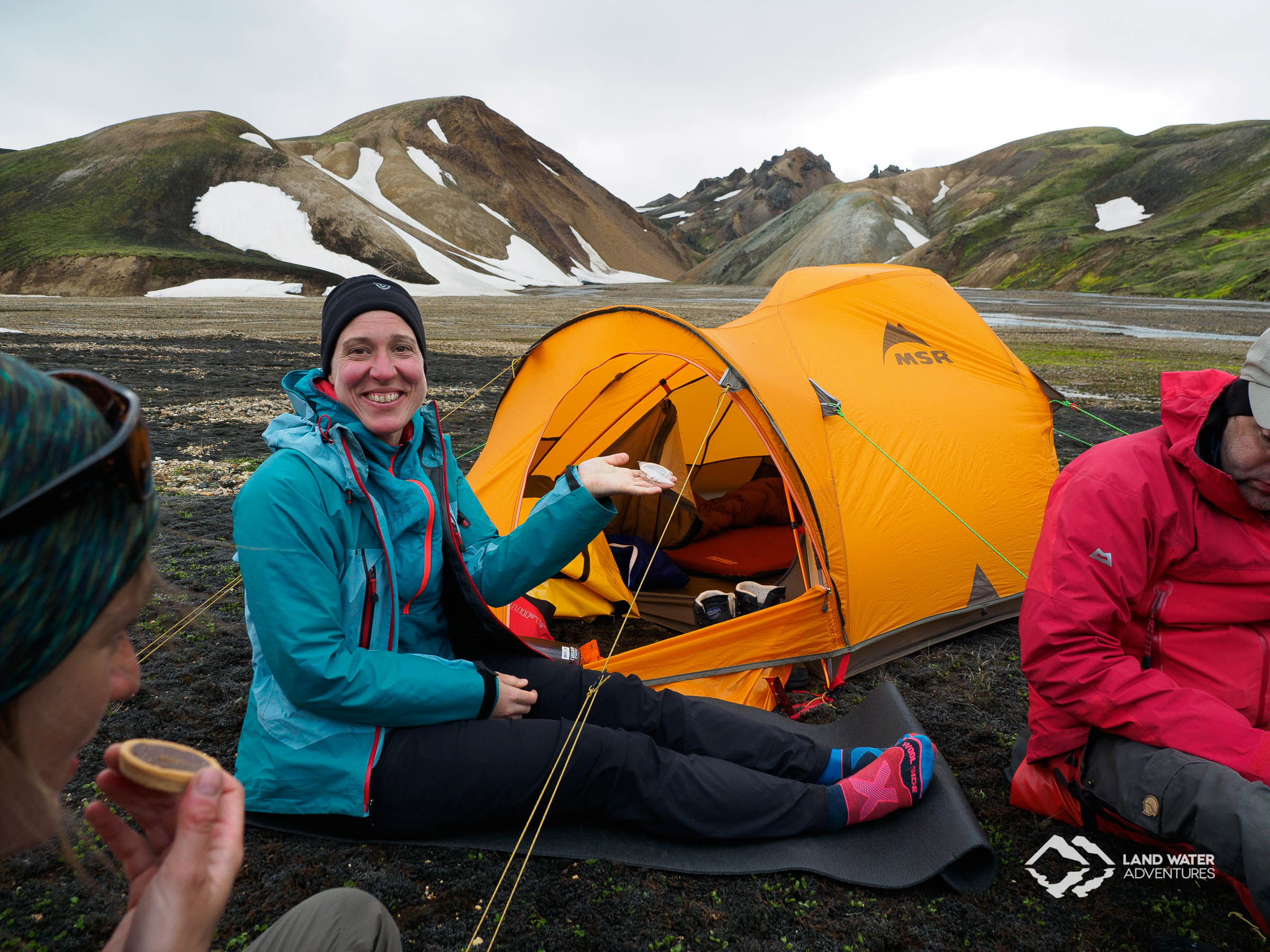 Such culinary moments will make the expedition days special a few more times. The result at the end of the expedition: two mousse au chocolat, an amaretto cream, a blueberry soup and many other little highlights in between. Thanks to the participants for carrying all this over the mountains.

And now, on the fifth day, we are standing in front of this canyon. Peter is just ahead and thus the first who sees the water, which, coming from the glacier through the moraine has eaten a gorge into the soft ground. As I get up to him, he looks back with a serious laugh and says "This one is impassable." A rushing inferno, the other side could be 2 kilometers away instead of the 5 meters and on the latest maps it does not even exist. There, this moraine is still a glacier. And we are standing right on it.

Good time for a break, while next to us two waterfalls fall down the edge. There few better moments for the pack of M & M's that Moni unpacks there. 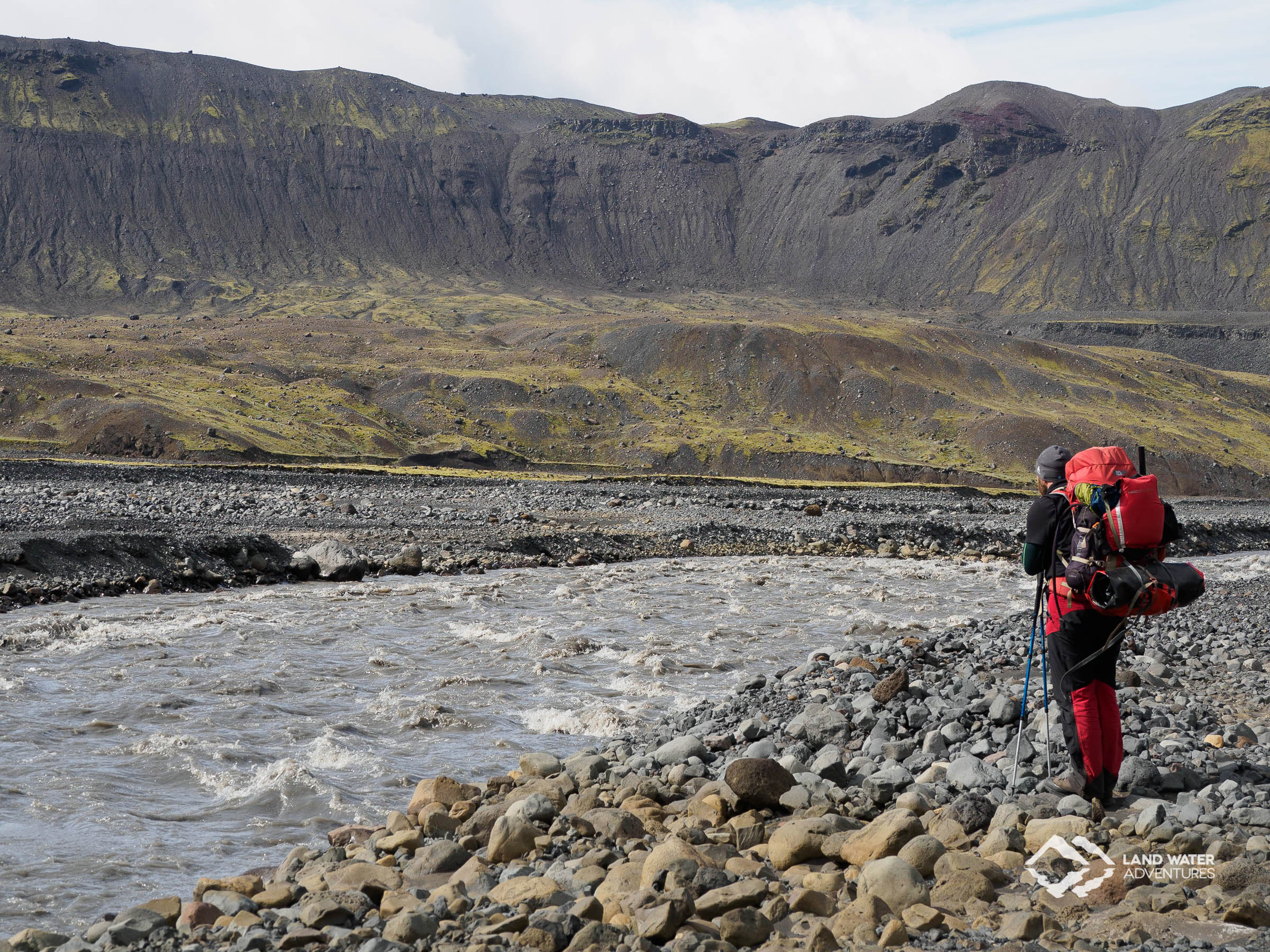 We'll be looking for a way through most of the morning, scouting a lot, pondering a lot, making many little decisions, using up our time-cushion, ending up on the other side, getting well over that ridge on the map which we called "The Wall" reverent for the last two days, and finally in the evening we will be sitting in the sun with little wind, laughing and talking. Before the gusts begin blowing the sand into every piece of our equipment. But at that point, we are already in our tents.

The next day will reward us for all the effort. The terrain begins to change - we see the first signs of the vegetation of Thorsmork. The lunar landscape of the first days is now behind us. We walk on densely mossy hills. Until the terrain drops steeply again, into our next riverday. Then: An altitude of 100 meters dowwards in which we fight our way through dense birch forest, paddling ends in branches, steep drops down and we can stay in contact only by shouts, so dense is the scrub.
If anyone had seen us, he would probably have laughed, as a small group from a green wall of rustling birch branches comes back to light. 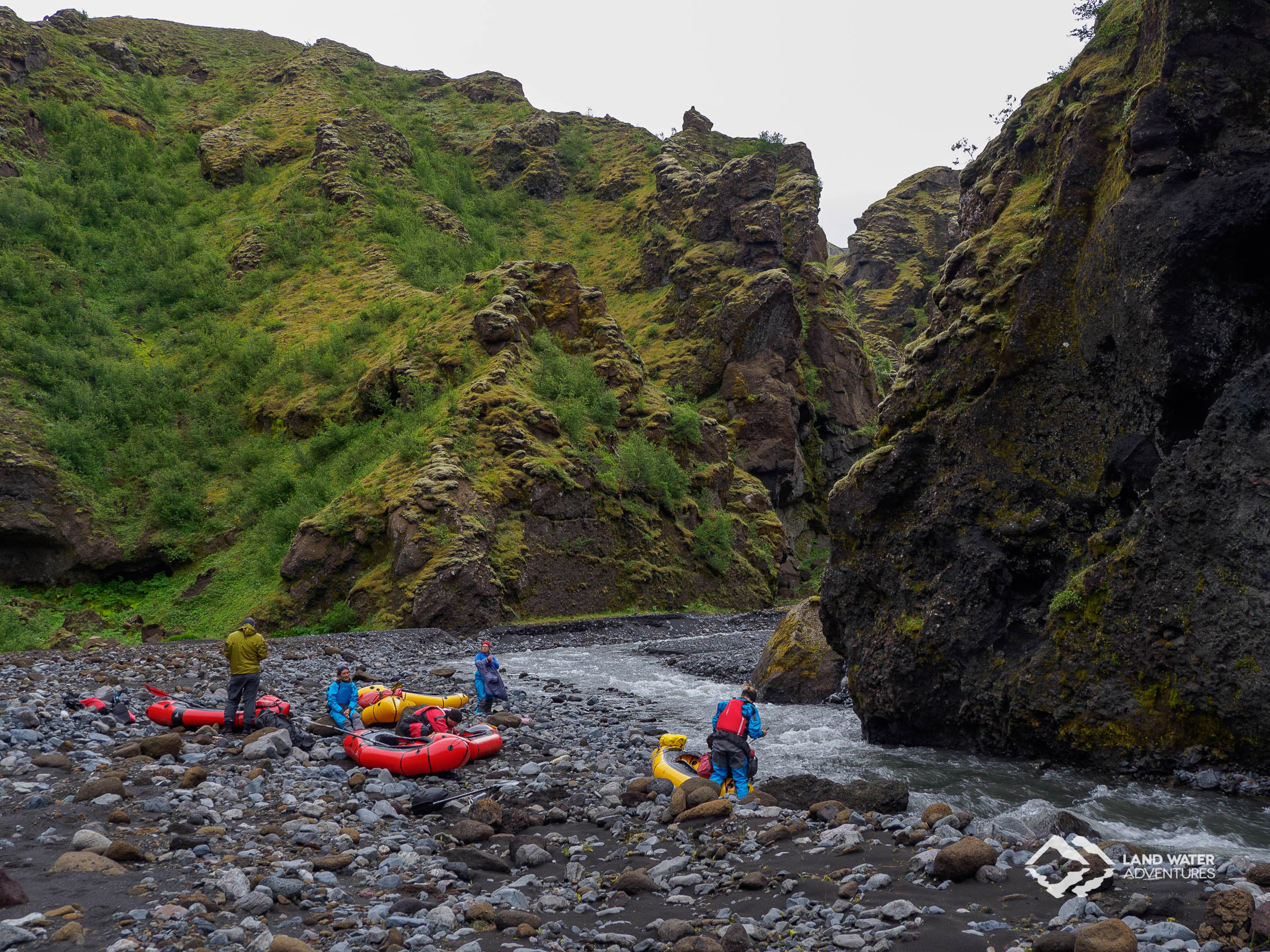 And suddenly we are standing on a small gravel bank of a deeply cut, beautiful canyon, from which the brook flows on the left, and into which it disappears on the right. We stay for a while in this magical place before the small, clear brook will carry us out and in front of us the forested hills of Thorsmork.
After 6 days, at the end of this river, next to blue lupines, we meet the first signs of civilization as we cross a footpath of a well-known hiking trail.

Shortly thereafter, we disappear into the adjacent hills and a few adventures are still in front of us. We will get up at 4:30 am in the sunshine the next day and nearly fly 35 kilometers down that river with our little packrafts in a huge riverbed past Eyafjallajoekull before we meet civilization again in the afternoon at one of Iceland's most visited waterfalls and change worlds again.

A little lava sand is still left on our skins.


Sebastian, leader of the expedition and basically satisfied as long as there is enough water and chocolate. More about Sebastian can also be found here.

In 2019 we will again take a small group of experienced outdoor people to the lava rocks, elves and waterfalls on Iceland packrafting expedition.

5 Replies to “„This one is impassable“ – Island Packrafting Expedition 2018”

...on the Land Water Blog. Here we, the blog team of Land Water Adventures, share personal impressions of our packrafting courses, tours and expeditions with our participants, report on our activities with our packrafts, sometimes off the courses, and give you insights behind the scenes of LWA.

This website uses cookies to improve your experience while you navigate through the website. Out of these, the cookies that are categorized as necessary are stored on your browser as they are essential for the working of basic functionalities of the website. We also use third-party cookies that help us analyze and understand how you use this website. These cookies will be stored in your browser only with your consent. You also have the option to opt-out of these cookies. But opting out of some of these cookies may affect your browsing experience.
Necessary Always Enabled
Necessary cookies are absolutely essential for the website to function properly. This category only includes cookies that ensures basic functionalities and security features of the website. These cookies do not store any personal information.
Non-necessary
Any cookies that may not be particularly necessary for the website to function and is used specifically to collect user personal data via analytics, ads, other embedded contents are termed as non-necessary cookies. It is mandatory to procure user consent prior to running these cookies on your website.
SAVE & ACCEPT